Siesta time on the Wisconsin River.
Click on the image for a larger view.

About five years ago, strangers started showing up on the Wisconsin River. Strange not just because of the way they look, but for the fact that they just hadn’t been seen in these parts before. White Pelicans – morning flights in neat formation – above a narrow, tree-lined body of water. Later in the afternoon, floating in rafts of a dozen birds, some congregating in pillowy clouds long the sandbars. Click on the image for a larger view.

Edward Lear said of the Pelican:
A wonderful bird is the Pelican
His beak can hold more than his belly can
He can hold in his beak Enough food for a week!
But I’ll be darned if I know how the hellican?

You know it’s cold when you can see Eagle breath. 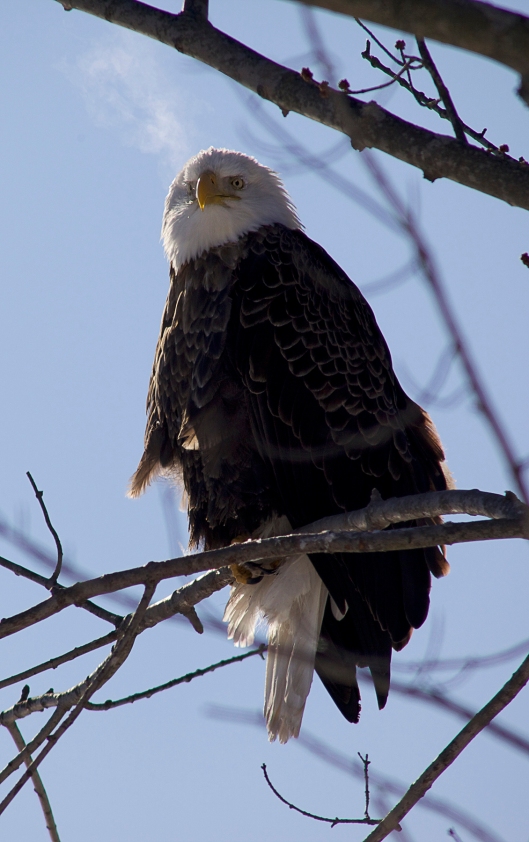 This immature bald eagle was looking for a meal near the hydroelectric dam in Prairie du Sac, WI. Another Polar Vortex gripped the area, freezing the river everywhere but just below the dam. Click on the image to see a larger size.

This weekend marks the Winter Solstice – the shortest period of daylight all year. The surest sign that we are indeed going to enjoy an extended period of cold temperatures and subdued hues, is the arrival of American Bald Eagles in the middle of the Wisconsin River near Sauk-Prairie. There is a smallish island with some very sturdy trees that the eagles use to perch during the times they aren’t fishing, hunting or scavenging. This year, a couple of bold birds have even taken to roosting in the trees on the bank of the river fairly close to the sidewalk used by locals and tourists eager to catch a closer glimpse of the impressive raptors.

Both of these eagles were photograhed north of Baraboo in September, 2012. When winter comes and water freezes, the eagles congregate in the Sauk City-Prairie du Sac area because a hydroelectric dam keeps the river open and the birds can find food. Click on a  photo for a larger image. 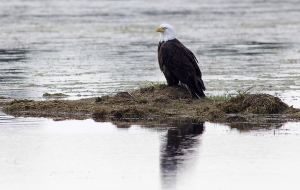 We took a walk along the Wisconsin River today – temps were in the 40s and the skies were mostly clear. More panoramic photos, this time of Ferry Bluff, patterns in the sand, ice, and the scenery in general. We saw a couple of Bald Eagles, lots of Canada Geese and several gulls, unfortunately too far away to photograph.

Last week the temperatures plunged causing the steam that rose from the Wisconsin River to collect on everything nearby.  The result was surreal. I had to stop and take a few pictures in spite of the fact that the temps were below zero.

This stretch of the Wisconsin is very close to the hydroelectric dam in Prairie du Sac.  In the winter, the river remains open in this area attracting Bald Eagles looking for an easy meal. I often see about half a dozen of these birds – both adults and juveniles – perched in the trees on a sandbar in the middle of the river. The morning this photo was taken the eagles’ high pitched call could be heard, but the fog kept the birds hidden.

Here are some more photos of the bald eagle release last Sunday. The first image is a composite of the Wisconsin River. Very small on left side is the hydroelectric dam. If we have an extremely cold winter and the river freezes over above the dam, the bald eagles concentrate in this area because they’re able to find food. Mostly fish, but they will also take some waterfowl. This year the birds are more dispersed. About 25 miles north there is a river from which a dam has been removed. Consequently, the favorite fish of the bald eagle, shad,  has greatly increased in population and many eagles have been observed roosting and fishing along the Baraboo River.

This female immature bald eagle was the second to be released. Here Marge opens her wing so we can get an idea of the wingspan and see the coloration indicating this bird’s age. Female raptors are usually larger than males. These females weighed about 12 pounds each.

The last eagle returned to the wild that day was this female, who was about 4 years old. If you look at the bird’s head, you can see that she is developing a sort of mask. This is what happens the year before the head and tail start to turn the characteristic white which unmistakably identifies the birds as American Bald Eagles.

Today was a special one on the Wisconsin River. Marge Gibson, of the Raptor Education Group, chose the VFW Park at the Prairie du Sac dam to release 3 Bald Eagles back into the wild. The first bird was an adult male, whom Marge believed to be an older bird. He was suffering from lead poisoning when he was brought into her rehab facility.

Here Marge is holding the bird against her body so he can feel secure as she walks through the crowd gathered to watch the release. All three of the birds were amazingly calm and the onlookers well-behaved.The last photo shows Marge and the eagle  atop of a pyramid of picnic tables. This gave everyone a great view as she launched the now healthy raptor into the air. He flew across the river and landed in a tree taking in his new surroundings. His hometown had been in Marathon County and it is thought that he will eventually head back there. The Wisconsin River is a good place to release these birds because of the availability of food. Once they’ve been on their own for awhile and had success with hunting, they’re able to make their way to more permanent territory.